PART 5. WHAT SHOULD I DO ABOUT PESTS AND PARASITES?

Once you have a busy population of solitary bees and solitary wasps visiting your Bee Hotel, it is common that some pests and parasites will also come along. Wasps, mites and spiders may try to penetrate the nests. This is part of the natural cycle of life in the Australian bush. However, there are some steps you can take to help prevent these pests and parasites from building up to levels that will threaten your bee populations. 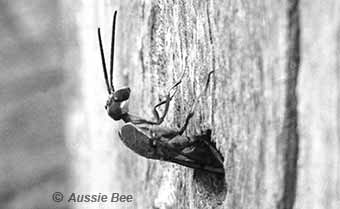 This Gasteruptiid Wasp is trying to lay an egg in the unattended nest of a Resin Bee in a Bee Hotel. See also the photo below. The Chequered Cuckoo Bee and, in particular, the Neon Cuckoo Bee are spectacularly coloured: black bees with blue polka dots. The blue fur patches of the Neon Cuckoo Bee sparkle in the sunshine, making it one of our most stunningly beautiful bees. Even though these bees do impact the numbers of our Blue Banded Bees, we are reluctant to remove them from our gardens, as their beauty is always captivating to see. The sharply pointed abdomen of the Coelioxys Cuckoo Bee is clearly seen in this great image by Peter O.

Gasteruptiid wasps
It is easy to spot the long slender Gasteruptiid wasps that are attracted to nests of Resin Bees. These wasps have bodies that are up to about 26 mm long (though some are as short as 6 mm) and most have long needle-like ovipositors, for laying eggs, extending from the tip of their abdomens. In some species, the ovipositor can be twice the length of the wasp's body! This Gasteruptiid Wasp, that targets Resin Bee nests, has a long slender body with a long egg-laying tube extending from its abdomen tip.

They attempt to insert their ovipositors into Resin Bee nests, before they are sealed, and lay their eggs. If successful the wasp's young will consume the young bee and its food. We usually control these wasps by catching them with a net and removing them. As these wasps are less than 2 mm long, catching them with a net is impossible. To prevent the build up of parasitic wasps of this kind, the best method is to periodically clean out the nest materials in your Bee Hotel using one of the methods described below.

Mites
Minute mites can also build up in a Bee Hotel, attracted to feed on pollen and the nest contents. As with the minute parasitic wasps, the best defense against the build up of mites is to periodically clean out the nest materials as described below.

Spiders
If spiders are permitted to build their webs around the structures of a Bee Hotel, they may catch adult native bees using the hotel. Periodically patrol your Bee Hotels and brush away any spider webs that you find.

Ants
Ants can also cause problems in Bee Hotels, attracted by the contents of the nest cells. To deter ants, try smearing Vaseline or a non-toxic horticultural glue around the support of your Bee Hotel.

Prevent build up of pests using an emergence box
To prevent the build up of mites and parasitic wasps in a Bee Hotel, it is useful to renew or clean the nest materials periodically. This may be difficult to do because, if you physically clean out a nest hole, you may kill some developing bee young in the nest. An alternative is to use an emergence box.

In early spring, place the timber blocks or bamboo tubes that contain completed nests into a cardboard box. Seal the lid onto the box so that it is dark inside. Then cut a hole in one top corner of the box.

As the new young bees emerge from their nests, they will be attracted towards the light and escape through the hole in the top of the emergence box. Once a set of nests have fully emerged you can clean out the old nest holes with a pipecleaner. Then place the nests into a freezer for a week to kill any mites or parasites left in the nest. Finally allow the nests to return to room temperature and put them out in the Bee Hotels to be reused.

Advice from the US Department of Agriculture (USDA) recommends that the liner should be slightly shorter than the tube and the end of the liner should be dark coloured to be attractive to the bees. Insert a pencil into the nest with its liner and burnish the tip of the tube against the opening of the nest hole. The middle two drilled holes in this timber block have been fitted with tube liners. The ends of the tubes have been burnished against the wood and darkened with a permanent ink felt pen. The next hole has tube liner, partly inserted into it.

Conclusion
Building a Bee Hotel is a fun and simple activity that all the family can enjoy. So why not 'Get Buzzing!' and set up some Bee Hotels in your garden to support your local native bee species? 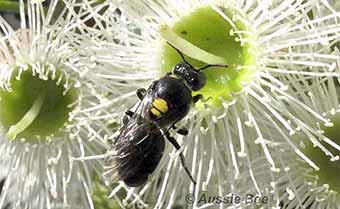