WHAT IS THE AUSTRALIAN NATIVE BEE RESEARCH CENTRE ALL ABOUT?

Aussie Bee > About Us

Promoting the Preservation and Enjoyment of Australian Native Bees

Aussie Bee website raises public awareness of our vital native bee species and helps ensure the bees' survival in Australia. It provides a wealth of free information, photographs and videos on Australia's 1,700 native bee species, based on the research of the ANBRC and other specialists. We gratefully acknowledge the many superb photographs and videos contributed to Aussie Bee website by skilled photographers, credited on the various pages. Established in 1997, Aussie Bee was Australia's first website on Australian native bees and has now been supporting our native bees for over 20 years.

In addition, the ANBRC publishes information ebooks and a field guide on Australian native bees. It also published the magazine, Aussie Bee Bulletin, for a five year period. 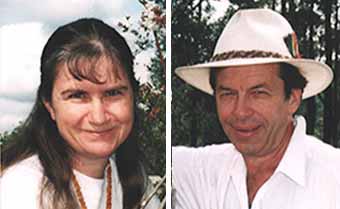 The ANBRC's co-founders, Les Dollin (a skilled bushman) and Dr Anne Dollin (an entomologist) have explored the most remote areas of Australia, locating rare species of native stingless bees and studying their behaviour and nests. They have now completed an in-depth analysis of all of Australia's stingless bees, including describing and naming a new species.

Les and Anne have supported the growth of the new stingless bee industry in Australia by investigating techniques and hive designs then distributing this information to stingless bee keepers. They have also contributed to pollination research on blue banded bees and stingless bees, and the potential of these bees as greenhouse crop pollinators. The work of the ANBRC has been featured on ABC’s Gardening Australia, Burke’s Backyard, and on ABC radio’s Science Show and Earthbeat programs.

In 2015, Dr Anne Dollin co-authored a chapter on the stingless bee species in Dr Tim Heard's prize-winning book, The Australian Native Bee Book. In addition, she contributed to the NSW DPI AgGuide: Australian Native Bees and has published many magazine articles on native bees.

The publications of the Australian Native Bee Research Centre have been warmly endorsed by a wide variety of specialists in the fields of science, agriculture and the environment.

Sales of the ebooks, field guides and other products on Aussie Bee website support the work of the Australian Native Bee Research Centre. Donations to support our work are also greatly appreciated.

Phone Enquiries
We are very sorry but we do not have the resources to answer general telephone enquiries about native bees. 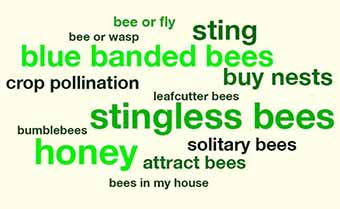