Like native bees, most adult wasps feed on nectar from flowers. So wasps (as well as flies) are common insects that bee-watchers will see visiting flowers in their garden.

Wasps should be treated with caution because many can sting. However, wasps are useful to have in your garden because they help to pollinate flowers and control insect pests. 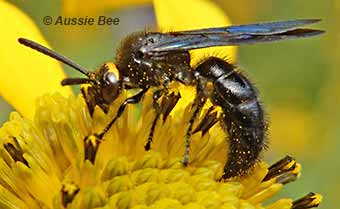 Above: Australian native wasps are common visitors to gardens and can be valuable flower pollinators.

The Australian Museum says there are over 12,000 species of wasps in Australia.

Spot the Differences in their Bodies!
Some wasps are predators, catching insect prey to feed their young. These wasps have strong jaws and they often have smooth shiny bodies and long fine legs. 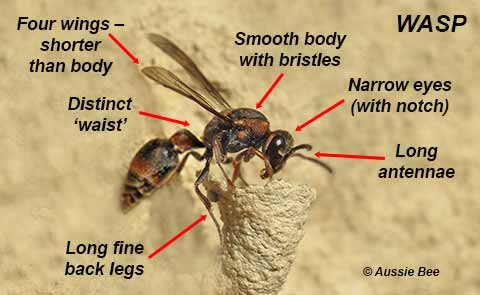 Many other wasps parasitise insects or spiders. Some parasitic wasps have a long thin egglaying tube or ovipositor protruding from the tip of their abdomen. The ovipositor may be up to three times the length of the wasp's body! These wasps can be up to 120 mm long, including the ovipositor. Other parasitic wasps are minute in size, down to just 0.15 mm in length. See photographs below.

In contrast, bees collect pollen from flowers to feed their young. Many have furry bodies and broad hind legs to help them collect and transport pollen back to their nests. Australian native bees range in size from 2 to 24 mm.

Spot the Differences in their Nests!
Some wasps chew leaves into a papery pulp which they use to build their nests. The cells of these papery nests are often hexagonal in shape -- the same shape as the wax cells made by European honeybees. So it is not unusual for people to mistake papery wasp nests for bee nests. However, Australian bees do not use papery pulp to build their nests. 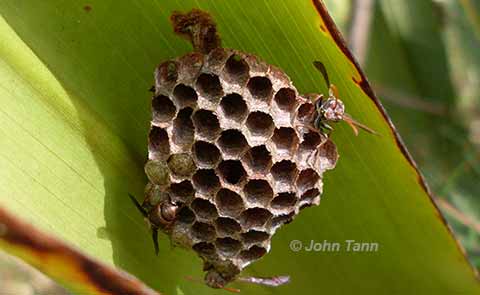 Above: a small wasp nest, with papery hexagonal cells, in Heathcote National Park, NSW. European honeybees also build nests with hexagonal cells that may look similar to this, but honeybees use wax, instead of paper, to build their cells. (Photo derived from work by John Tann, CC BY 2.0.) 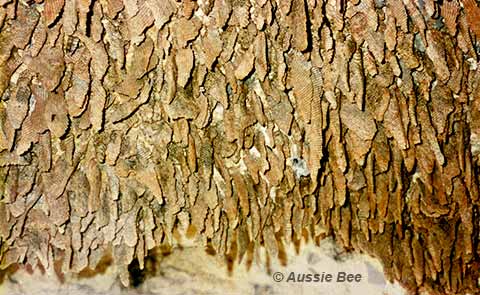 Above: native Ropalidia wasps built this crowd of papery nests in the roof of a cave near Mudgee, NSW. Each nest had dozens of papery hexagonal cells fitting closely together in a single layer. These kinds of wasp nests are often mistaken for bee nests.

Others wasps use mud to construct their nests.
-- Some wasps sculpt delicate clay cells or elaborate clay mounds, that you may see attached to a wall or a tree.
-- Others nest inside holes in timber, just like Australian resin bees do. However, wasps seal their nest entrances with a creamy-coloured clay plug or a clay tunnel, while resin bees seal their nest entrances with red-brown resin or green chewed leaf material. 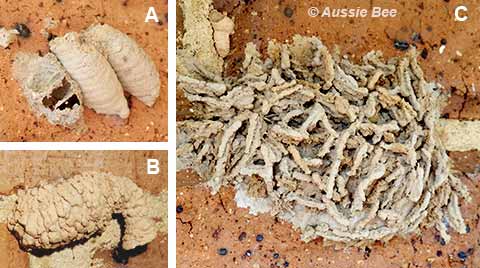 Above: some of the different types of mud nests made by Australian native wasps. 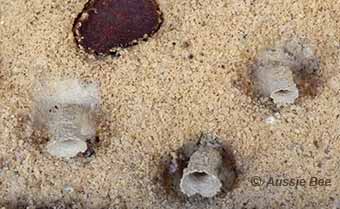 Above: native wasps and a resin bee have built nests inside four drilled holes in this mud brick. The three lower nests were made by native wasps and have mud tunnels protruding from them. In contrast, the upper nest was made by a native resin bee and is sealed with a plug of brown resin. 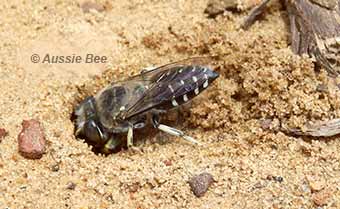 Above: a native Bembix wasp digging away the sand from the entrance of her nest in a burrow in the ground. Many kinds of Australian native bees nest in similar burrows in the ground.

Take a look at our gallery of wasp photos below, and read Aussie Bee's special report about how to distinguish wasps from native bees. 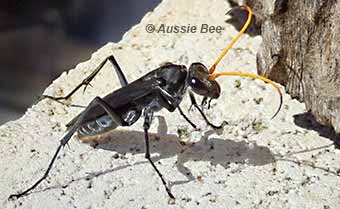 Above: a large Spider Wasp (Family Pompilidae) that hunts spiders to feed its young. 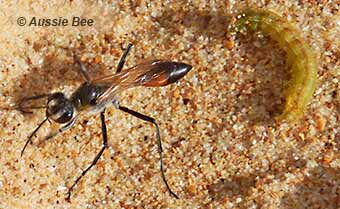 Above: this Sand Wasp (Family Sphecidae) has caught and paralysed a caterpillar to feed its young, and is digging in the sand near a beach to open the entrance to its nest burrow. 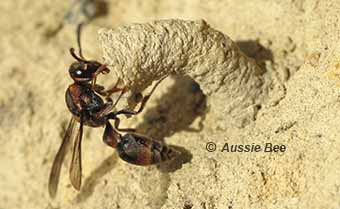 Above: a Potter Wasp (Family Vespidae) finishing off the mud tunnel leading to its nest in a mud brick. 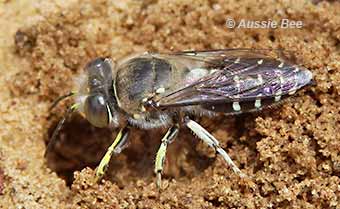 Above: the Bembix Sand Wasp (Family Crabronidae) digs shallow nests in flat sandy areas. This species targets nests of stingless bees and groups of these wasps may be seen hovering near the nest entrance. However, they normally only try to catch male bees, so do not significantly threaten a stingless bee nest.

Above: the Blue Flower Wasp (Family Scoliidae) is a beautiful, but quite hairy, large wasp, seen here feeding on a flower. They prey on beetle larvae. 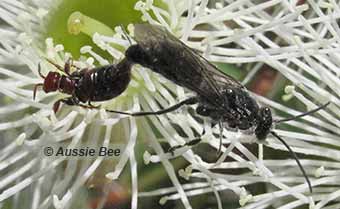 Above: these Flower Wasps (Family Tiphiidae) have a remarkable lifestyle. The female (on the left) is wingless and her specialised body is adapted to digging through the soil to find the burrowing beetle grubs that are her prey. During the mating period, the much larger male couples with the female and he carries her from flower to flower, while they feed on the nectar. 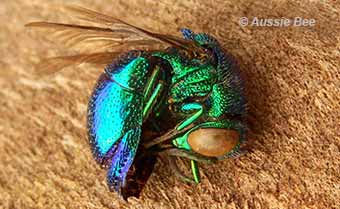 Above: this spectacular metallic-green Cuckoo Wasp (Family Chrysididae) has a concave area under the abdomen which allows it to curl into a ball if threatened. Most Cuckoo Wasps are parasites of other kinds of wasps. 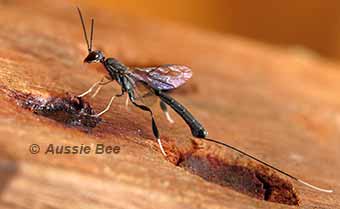 Above: the slender Gasteruptiid Wasp (Family Gasteruptiidae) preys on the nests of resin bees. She may be seen hovering near Bee Hotels, looking for unattended nests. She has a long thin egg-laying tube or ovipositor extending from the tip of her abdomen. She tries to insert her ovipositor into an unsealed resin bee nest and lay her egg. The egg develops into a grub that feeds on the resin bee young. 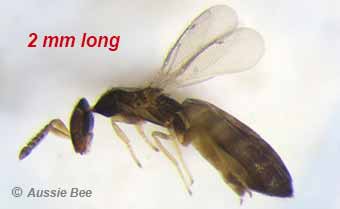 Above: many native wasps are minute because they specialise in parasitising other insects. This tiny wasp (Family Eulophidae), just 2 mm long, is a parasite of native leafcutter bees. Dozens of these wasps may be found developing inside a single nest cell in a leafcutter bee nest! 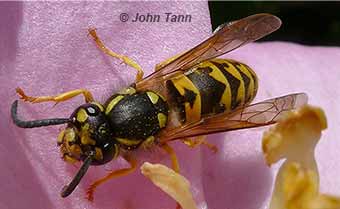 Above: the feral European Wasp, Vespula germanica, (Family Vespidae) was introduced into Tasmania in 1959 and this aggressive pest wasp has now unfortunately spread to Victoria, New South Wales, South Australia and Western Australia. It builds large papery nests that are normally underground or in a cavity. Each nest may contain thousands of wasps, that come and go through a small single entrance hole. (Photo derived from work by John Tann, CC BY 2.0.) A second similar species of feral wasp, the English Wasp, Vespula vulgaris, has become established in Victoria and South Australia.

'A Field Guide to Insects in Australia' by Paul Zborowski and Ross Storey.

The Brisbane Insects website -- contains a wealth of photos and interesting information on Australian wasps, flies and bees. 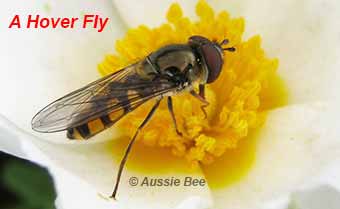