We recently identified a new species of stingless bee, Austroplebeia cincta, that had not been documented before in Australia! So in November 2012 Aussie Bee embarked on a special native bee safari to the rainforests of far north Queensland to thoroughly research this species.

You may like to read the two detailed articles on this new species that we have added to Aussie Bee Online. Meanwhile, take a look at some of the fascinating photographs and videos we captured of this unique new species!

We studied fifteen nests located on a cattle station belonging to the Roberts family near Cooktown. Lewis, Edith and Charlie Roberts gave us tremendous support in our research. Their expert bush skills and in depth knowledge of the local flora and fauna were invaluable in our work!

Above: Anne Dollin of Aussie Bee with Charlie and Lewis Roberts.

The workers of this new species, Austroplebeia cincta, are tiny -- only 3.4 mm long. They have striking bright yellow markings on the face and thorax. 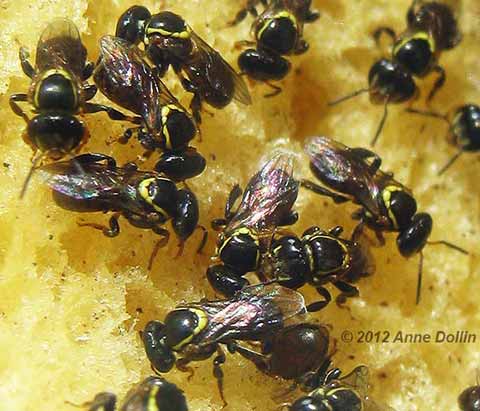 Above: these brightly marked Austroplebeia cincta worker bees were enjoying a free feed of native bee honey from a honey feeder sponge.

These bees look particularly pretty peeping out of their nest entrance tunnels! Lewis Roberts has known about them since he was a boy. He calls them 'The Pretty Ones.' 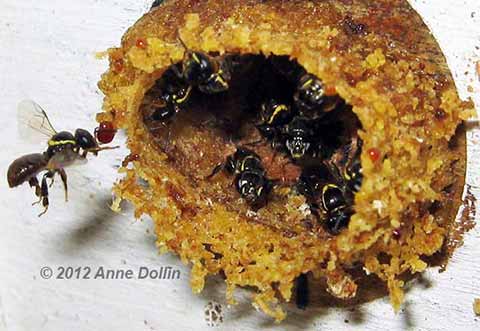 Above: Austroplebeia cincta bees can build entrance tunnels very quickly! This tunnel was built in a few hours by a colony that we boxed during our research trip.

Like all the other Austroplebeia, this species builds resinous tunnels as nest entrances. However, this species builds the longest free-standing entrance tunnels we have ever seen in an Australian stingless bee nest. Aggressive green ants were harassing many colonies of these bees. The bees were extending their entrance tunnels with fine meshes of very sticky resin to keep the green ants out. The bees kept adding more and more resin all day to their tunnels; so the tunnels kept getting longer and longer!

Above: This Austroplebeia cincta nest had built a 17 cm long tunnel with a sticky end.

Above: This Austroplebeia cincta nest had the longest free-standing entrance tunnel we had seen in Australia. It was 43 cm long! If you look closely you can see a few green ants near the end of this tunnel. 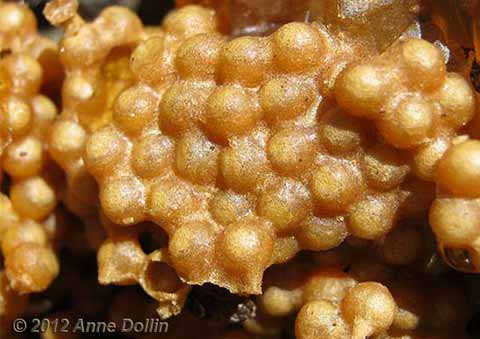 Above: The most recently built group of brood cells in an Austroplebeia cincta nest. The cells are waxed tightly together into a layer that is one cell thick.

The honeypots and pollen pots of the Austroplebeia cincta nest were tissue paper thin -- delicate and fragile. They were built in small clusters near the edges of the nest. 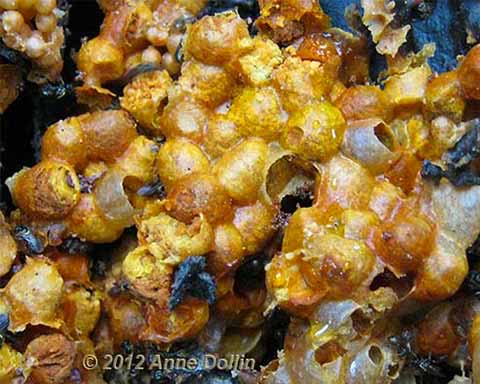 Above: the pollen pots (upper left) and a few honey pots (lower right) in an Austroplebeia cincta nest.

The queen bee could regularly be seen patrolling the brood. Her massive abdomen was swollen with eggs. 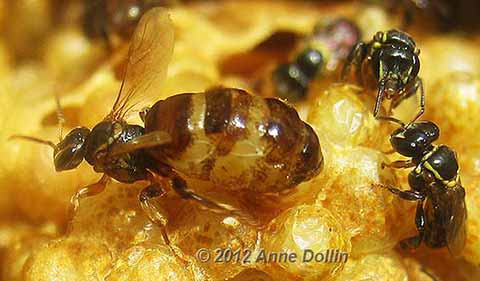 Above: the massive Austroplebeia cincta queen surveying her brood comb, watched by some worker bees.

In all other Austroplebeia species, the male bees are more colourful than the worker bees. However, to our surprise we found that the males of Austroplebeia cincta were much darker than the workers and lacked the bright yellow mark on the rear edge of the thorax. This is unique within this genus. 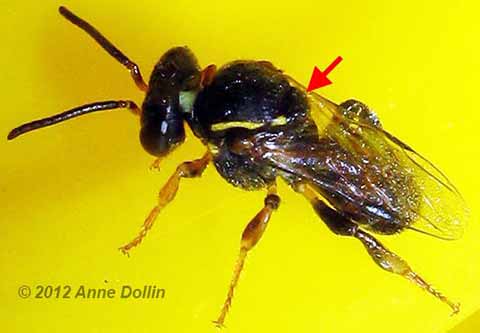 Look at the rear edge of the thorax in these bees, marked by the red arrows in these photos. The Austroplebeia cincta male (above) lacks the bright yellow marking that is plainly seen on the worker bee (below). You can also see the particularly long antennae that all stingless bee males have. 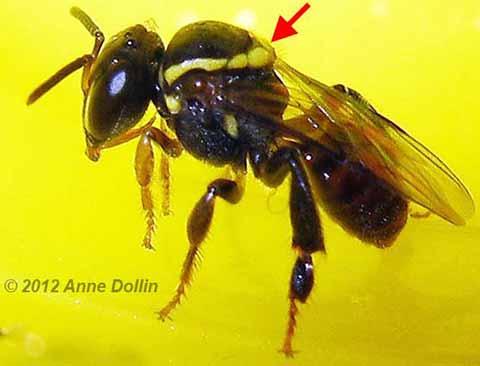 We hope you have enjoyed this 'sneak peek' at our photos and videos of this spectacular new Australian species. Please also read our full report about these beautiful native stingless bees and see some dramatic new photos of the queen laying her eggs - in Aussie Bee Online Articles 22 and 23. 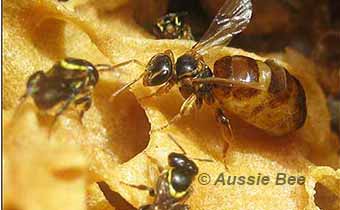