In 2008, our Federal Government rejected a second application by horticulturalists to import live Bumblebees into Australia.

The Australian Hydroponic and Greenhouse Association had proposed to import the European Large Earth Bumblebee, Bombus terrestris, for crop pollination.

The Hon Peter Garrett, Federal Minister for the Environment, Heritage and the Arts, issued a press release on 26 October 2008 giving his reasons for rejecting their application.

-- "the plan ... could have posed a serious risk to the Australian environment, native bee populations and native bird species."

-- "the environmental and economic risks of a large earth bumblebee population spreading throughout mainland Australia are significant."

-- "No matter how hard we try to contain them to greenhouses the risk of their escape into the environment are too great."

-- "they have the potential to contribute to the rapid spread of weeds, including exotic species that have not yet become established."

-- "these bees would compete with native species for food."

-- "Large earth bumblebees can upset pollination and damage flowers when taking nectar, potentially robbing native birds of food - many of these are already under threat because of habitat loss and destruction."

More information:
The horticultural industry's application in 2004-6 to import European Bumblebees to Australia was full of half truths and inaccuracies.

An earlier application in 1997 to import Bumblebees to mainland Australia for crop pollination was also rejected by Environment Australia and AQIS due to concerns about this exotic bees' impact. 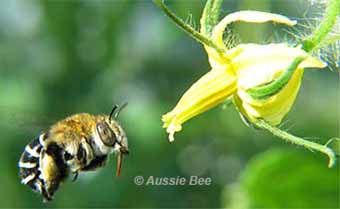