The territorial behaviour of the Banksia Bee is one of the most fascinating examples of Australian native bee behaviour! The 12 mm long male Banksia Bee (Hylaeus alcyoneus) fiercely defends a miniature territory on a Banksia flower spike. He whirs his wings and fights off all other males, like a 'King of the Castle.' 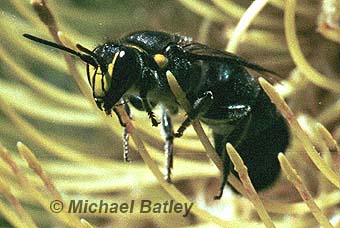 Above: a male Banksia Bee guards his Banksia flower territory. This excellent photograph was contributed by Dr Michael Batley.

The Banksia Bee, Hylaeus alcyoneus, is black with a dark metallic blue abdomen. It has bright yellow markings on the face and across the shoulders. This species belongs to the Masked Bee group in the family Colletidae. It is found in southern areas of Australia, including Tasmania. 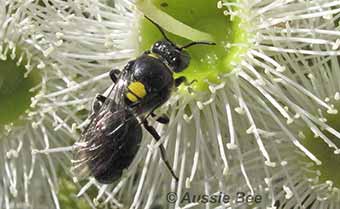