The Australian native Wasp Mimic Bee, Hyleoides concinna, has the orange and black colouring of a wasp to help protect it from predators. However, it is a true solitary Australian native bee. It weaves an amazing curtain over its nest entrance from cellophane-like material that it secretes in a gland near its tongue. 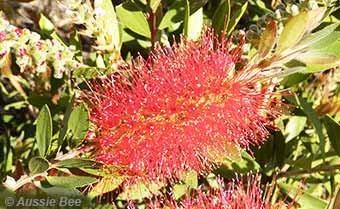